It comes as no surprise that I adore Japanese cinema and that I watch a lot of it. After all, I legally changed my name to that of my favourite actress. In the spirit of Hallowe’en, here are 5 creepy Japanese films ranging from tongue-in-cheek horror to full-blown psychotic. Happy Hallowe’en, boils and ghouls!

Starring my namesake Chiaki Kuriyama as Mizuki who is mistreated and betrayed by everyone around her. On top of that, her mother recently committed suicide. On the eve of her 19th Birthday she is seemingly magnetically drawn to a dilapidated estate where she finds the mysterious Adam, played by the very talented musician Hyde. Them finding each other starts off a chain of strange events and you’ll want to stick with the film to figure out how everything is connected. This is a sweet and sad fairy tale based on the manga with the same name. If you like ghost stories and mysteries, this one is for you.

A small Japanese town becomes increasingly tormented by malevolent spirals. A schoolgirl notices that her dad has developed an unhealthy obsession with spirals. He meets his end by crawling into a washing machine turning himself into a spiral. Soon everyone is infected by the spiral virus causing strange behaviours and in some cases, physical transformations. Uzumaki is based on the surreal manga with the same name by Junji Ito, and it has been heavily treated with green colour filters. I find spirals mesmerisingly beautiful and this film is covered in them.

Another film starring Chiaki Kuriyama. A morgue night attendant steals hair from corpses and turns it into hair pieces that he sells to unsuspecting customers. The hair pieces carry the grudge of their original owners, leading to painful deaths for those who wear them. This is a clever parody of J-horror yurei films such as Ringu (1998) and Ju-On (2002). It’s a lot more comedy than horror. Directed by Sion Sono who also did Suicide Club (2001) and the much darker Cold Fish (2010). 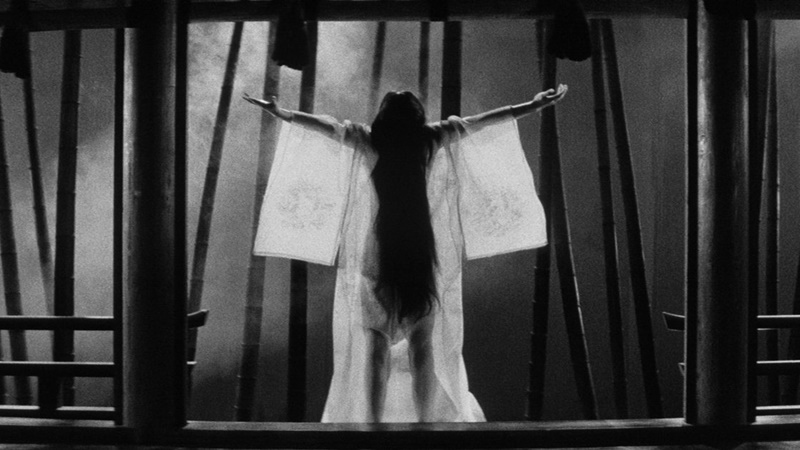 In war-torn feudal Japan, two women are raped and killed by samurai soldiers. They come back as vengeful ghosts who take their revenge on the passing samurai by seducing and brutally murdering them. The women drink their blood and exhibit feline behaviour. Kuroneko translates as black cat. This is essential Japanese cinema. It’s full of haunting imagery and breathtaking visuals. A stunning atmospheric film with a feminist angle.

A lonely widower lives with his son after his wife passed away from illness. His film producer friend sets up a fake audition to find him a new wife and he instantly becomes fixated on the young Asami. His friend thinks she’s somehow peculiar but a romance ensues. As the story unfolds the line between reality and dream becomes blurred. Is Asami really the epitome of innocence? Perfectly directed by the outlandish Takashi Miike, based on a novel by Ryû Murakami. Two men whose work I love. This non-traditional horror comes with a warning: It will leave you feeling nauseous.