I’m devastated about the tremendous loss of David Bowie; my hero, mentor, muse and inexhaustible source of inspiration. It’s so hard to accept that I’m now living in a world that doesn’t have Bowie in it. I’m not ready to share it yet but I’ve started writing about how we can carry on his legacy. So, today I’m sharing something else entirely. I came across this lovely post over on Beached Librarian. It’s such a wonderful take on book love that I simply had to give it a go.

Phase 1 – Initial Attraction: A book that you bought because of the cover?
Crime by Irvine Welsh. A Scottish Detective Inspector suffers a stress and cocaine fuelled mental breakdown after a child sex murder case, and flees to America with his fiancée who’s completely absorbed in planning their wedding. There, he meets a ten-year-old girl who is a child abuse victim and he becomes obsessed with saving her. Welsh interviewed victims of child abuse as research for this book, and he almost abandoned the first draft after Madeleine McCann’s disappearance. If you want to lose your faith in humanity, read this book.

Phase 2 – First Impressions: A book that you got because of the summary?
Molecules of Murder: Criminal Molecules and Classic Murders by John Emsley. Chemistry and true crime meet in this fascinating book. It’s become one of the books that I can’t bear parting with. Emsley’s other books sound really interesting too.
“Molecules of Murder is about infamous murderers and famous victims; about people like Harold Shipman, Alexander Litvinenko, Adelaide Bartlett, and Georgi Markov. Few books on poisons analyse these crimes from the viewpoint of the poison itself, doing so throws a new light on how the murders or attempted murders were carried out and ultimately how the perpetrators were uncovered and brought to justice.”

Phase 3 – Sweet Talk: A book with great writing?
Anything by P.G. Wodehouse. He had such a witty way with words. Also, anything by Lewis Carroll. I love that he as a mathematician had a penchant for playing with logic in his books.

Phase 4 – First Date: A first book of a series that made you want to pick up the rest of the series?
The Devotion of Suspect X by Keigo Higashino. A single mother lives a quiet life with her teenage daughter. One day, her abusive ex husband shows up and starts threatening them. Things escalate quickly and he ends up dead on the floor. Their neighbour, a mathematical genius, who has heard the commotion offers to help them cover the murder up using his logical thinking. His devotion to them and what he’s prepared to do for them is what drives the plot. When Inspector Kusanagi is assigned to the case, he instinctively knows that things aren’t adding up despite the mother’s seemingly perfect alibi. With the help of his friend Yukawa, a brilliant physics professor, will he be able to crack the case?
If I’ve understood this correctly, this is the third book in Higashino’s Detective Galileo series but the first to be translated. It’s a shame that it has been badly translated because it’s such a wonderful, clever mystery novel full of twists. Only two books of the series have been translated so far, but another one will be published this year. 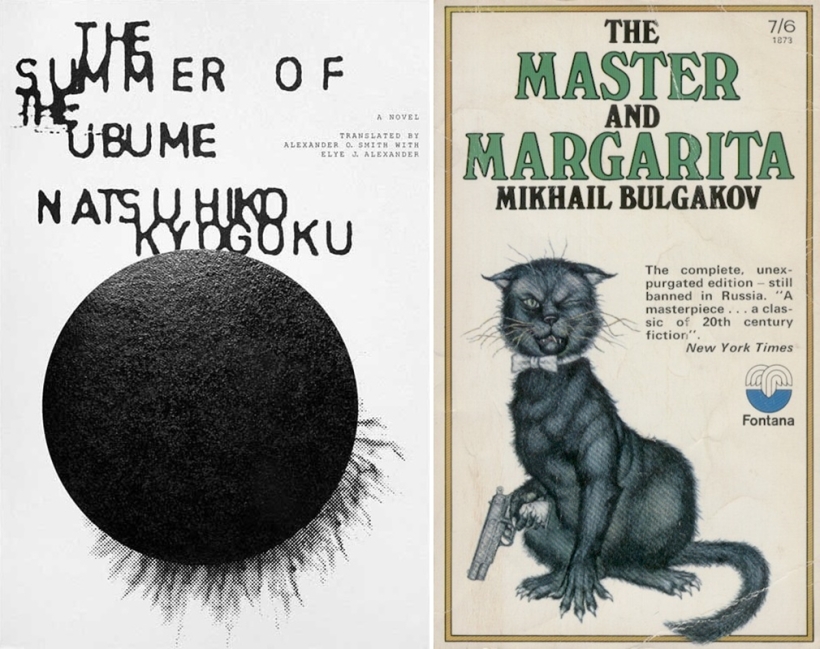 Phase 5 – Late Night Phone Calls: A book that kept you up all night?
The Summer of the Ubume by Natsuhiko Kyogoku. According to Japanese folklore, an ubume is the ghost that arises from the burial of a pregnant woman. Kyogokudo is an exorcist who doesn’t believe in ghosts. To help people get rid of their problems that they believe are caused by ghosts, he stages fake exorcisms. We follow Kyogokudo as he tries to find a pregnant woman’s husband who disappeared 18 months ago. The bizarre thing is that she has been pregnant for 20 months. It’s compelling reading!

Phase 6 – Always On My Mind: A book you could not stop thinking about?
We Need To Talk About Kevin by Lionel Shriver. An incredibly well-written novel in which a mother tries to process her son’s mass murder through letters to her ex husband. It’s a disturbing and believable story. I still find myself thinking about it. I can relate to her conflicting feelings towards motherhood, having myself gone from firmly not wanting to have children ever, to completely changing my mind about a year and a half ago. I highly recommend that you read this one, but don’t bother with the film.

Phase 7 – Getting Physical: A book which you love the way it feels?
Rosemary’s Baby by Ira Levin. It’s been one of my favourite books since I was little. The atmosphere in the book (and in the film) is deliciously eerie. I have to admit that I’m biased because I’ve always identified with Rosemary, even as a little girl. Psycho by Robert Bloch is another book that I love the creepy feel of. Using a false narrative which turns into a “split” narrative is a very unusual technique, and one that I greatly admire. I’ve never read anything quite like it. I also love the feel of Agatha Christie’s books because she’s the queen of cosy murder mysteries. I grew up reading my mum’s old Christie books so they take me back to my childhood, and make me feel safe.

Phase 8 – Meeting the Parents: A book that you would recommend to your family and friends?
The Master and Margarita by Mikhail Bulgakov. It’s a masterpiece that has everything. Satire. Good versus evil. A book within a book. A huge, fast-talking, mischievous black cat who walks on his hind legs. The devil in the disguise of a foreign professor. A red headed succubus. Everything!

Phase 9 – Thinking About the Future: A book or series you know that you will re-read many times in the future?
Wilderness and The American Night, both by Jim Morrison. I immerse myself in his poetry. Lament for the Death of My Cock is one of my favourites of his poems.

Phase 10 – Share the Love: Who do you tag?
Anyone who wants to play!